kurimanzutto is pleased to present the first solo exhibition at the gallery by British artist Sarah Lucas. This is Lucas’ second exhibition in Mexico, after having shown NUDS at the Museo Diego Rivera Anahuacalli in 2012.

The artist’s work is characterized by irreverent humor and the creation of visual puns and vulgar euphemisms referring to sex, death and identity. Nodding to the gallery's geography, the exhibition includes two exquisite corpses made of cigarettes depicting Frida Kahlo and Diego Rivera, intervened replicas of Prehispanic coyote sculptures, a tracing of a drawing by the Russian-Mexican painter Vlady, through which Lucas makes notable references to her relationship with Mexican culture since her first visit to the country. The works that Lucas presents here are in continuity with the experiences that she has cultivated with local friends and collaborators.

Lucas’ practice is based primarily on sculpture, installation, and photography, and involves diverse materials that span from carved stone, to resin moulds, eggs, as well as food and beer cans, to mention only a few. The artist uses cigarettes as a recurring artistic motif, symbolizing a central habit in her life that, while self-destructive, gives her a space for reflection, or as the artist says, “a tangible way of taking her time”.

This commentary on self-destruction and time gains relevance with her piece EPITAPH BLAH BLAH, 2018: a wrecked car adorned with waves of cigarettes. These cigarettes are transformed into a character with a palpable violence that is unsettling. Throughout the exhibition Lucas plays with everyday objects to create a fraught affirmation of their existence.

In the series RED SKY (2018) the artist is photographed in defiant poses as a searching game of her own personality, which is at the same time present and veiled by cigarette smoke.

DAME ZERO evokes a harsh view of human reality closely related to Lucas’ perception of the body and its vulnerability. This group of works seeks to question the way in which we understand and relate to inherent aspects of the human experience, such as sexuality, sickness, and death, as well as culture, and the symbols that make it distinguishable. 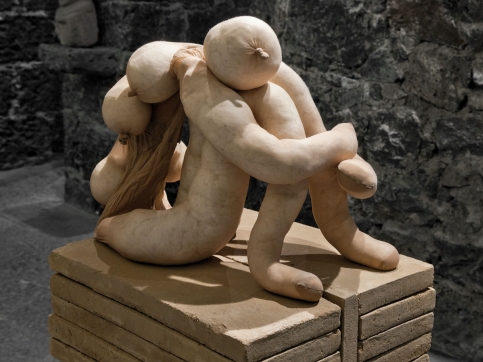