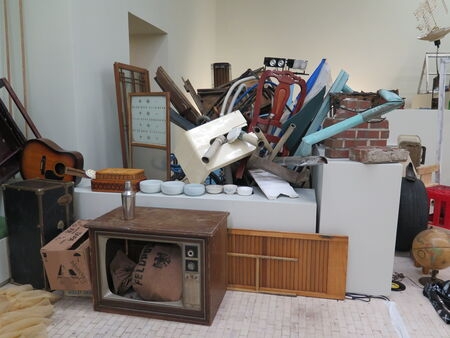 The war cold is located in West Berlin in times of the Wall. The scene takes place between 1982 and 1984. Two mexicans, a rock musician (El Gato) and an actress (Carolina), have settled there following the steps of David Bowie and Lou Reed, who a few years earlier had given the mythical quiality to the city. The plot occasionally follows Reed´s record, Berlin. In the divided city, he woos the destruction of drugs and confuses aggression with passion. The real "cold war" happens between them, but both decide to lose the war to stay together.

The work and effort of the institutions participating in this project, as well as the creative and artistic team involved, helped taking the theater out of the theater and take it to a museum space, a practice that isn´t carried out very frequently in Mexico City. This gesture is fundamental for the development of new forms of presentation, of diffusion, of involvement of the public and, mainly, new forms of investigation around a process of creation that helps to create a current dialogue of the performing arts and the plastic arts, its limitations and its possibility of growth.

The work Autodestrucción 8 by Abraham Cruzvillegas is a piece that was incorporated in 2016 to the collection of Museo Tamayo thanks to the program Pago en especie. Autodestrucción 8 is where the construction of the universe where the protagonists live in, begins, both aesthetically and in its most deep meaning. The love affair, the inevitable destruction that one exerts on the other and on themselves are expressed through this piece, thus becoming a living metaphor of the relationship of the couple. Autodestrucción 8 allows the characters to inhabit the piece and explore its physicality within this created world, and not only theirs, the audience will also find their own space within the space, transforming the conventional relationship established in a museum between the work and the spectators.

La guerra fría will be held in room 4 at Museo Tamayo as an extension of the exhibition of its collection. If there are no shows, the public can walk through the room and see the installation Autodestrucción 8.

Sale at the museum

Saturdays and Sundays from 5 pm to 6 pm.