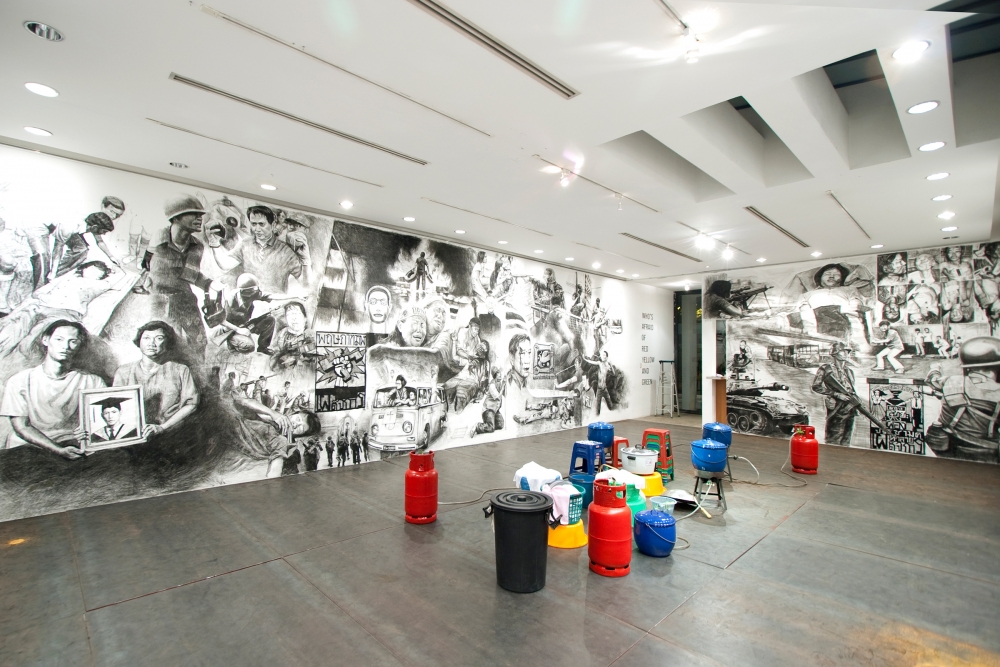 The installation includes a large-scale mural, drawn on the walls over the course of the exhibition, which references protests against Thai government policies. Additional historic images speak to protest and the present. The exhibition also includes a series of documentary shorts curated exclusively for the Hirshhorn by Thailand’s leading independent filmmaker and Palme d’Or prize-winner Apichatpong Weerasethakul in collaboration with the artist.Tiravanija’s presentation unites his signature communal food-based work with his ongoing series of drawings derived from protest imagery, creating a unique dialogue within a single installation.

Tiravanija’s long and varied career defies classification. For nearly 30 years, his artistic production has focused on real-time experience and exchange, breaking down the barriers between object and spectator. The title of Tiravanija’s culinary installation, which is presented at the Hirshhorn for the first time since it entered the museum’s collection in 2017, (who’s afraid of red, yellow, and green), refers to the colors worn by the various factions in recent Thai government protests. The title also refers to the 1982 vandalism of Barnett Newman’s similarly titled painting in Berlin, which was motivated by the attacker’s belief that Newman’s painting was a “perversion” of the German flag. To soften Newman’s provocative title, Tiravanija uses parentheses and lowercase letters, suggesting that viewers answer the question as framed: “Who is afraid of what these colors symbolize?”