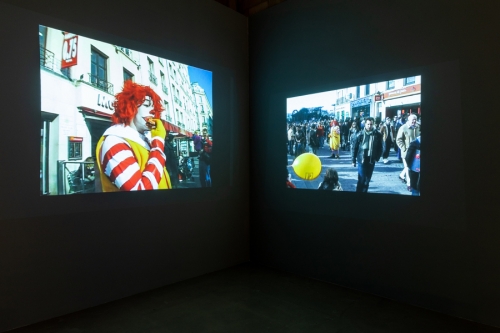 Gathering seven videos and a slide show, dissidencia is Cuevas' first major individual in Brazil. Appropriating the language of marketing and advertising frequently, many of his works dialogue with icons of pop culture to rethink social relations, the role of large corporations in the production of food and the use of natural resources.

“The shed will be entirely occupied by video installations in different formats. Title of an emblematic work, dissidencia serves to demarcate opposition and active contestation ”, explains Gabriel Bogossian, curator alongside Solange O. Farkas.

With the support of kurimanzutto, the show bets on the junction of art and activism, at a time marked by serious changes in legislation regarding the use of pesticides, the deforestation of the Amazon, the demarcation of indigenous lands in Brazil.

“By exhibiting one of the most inventive and forceful artists in Latin American political production, Videobrasil reaffirms its commitment to the geopolitical debate. Minerva's work is especially informative about our context, given the similarities between Brazil and Mexico in several of the aspects covered, ”adds Solange.

Arranged in space, works such as A Draft of the Blue (2013) and Donald McRonald (2003) suggest a latent possibility of revolt implicit in everyday life.