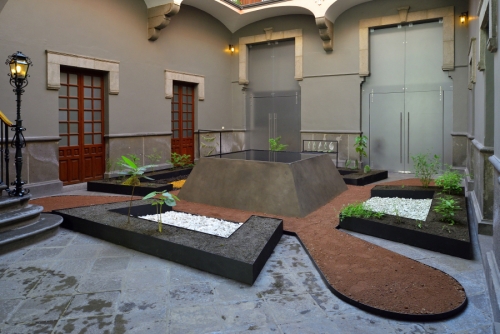 Artist Mariana Castillo Deball and researcher Diana Magaloni present an interpretation/intervention on the origins of our history, where the experience of the indigenous peoples interprets and recreates the moment of the conquest and the transformation of the land to create a new cultural reality that still marks our way of being and seeing the world.

The exhibition gathers colonial codices from the Biblioteca Nacional de Antropología e Historia (National Library of Anthropology and History) and map-paintings from the Archivo General de la Nación (General Archive of the Nation), together with the encyclopedic project known as the Florentine Codex housed in the Biblioteca Medicea Laurenziana, in Florence, Italy. Together, the documents examine the indigenous point of view on the conquest and the processes of survival, negotiation, and creation of a new land.

Our historic indigenous documents are stored in national and foreign archives and libraries and are very difficult to access. That is why they are presented here in various formats in order to materialize the question: to whom does the past belong? In this way, printed historical copies and projected facsimile reproductions made especially for the exhibition, along with original map-paintings are displayed.

The chemical study of the colors in the Florentine Codex has a relevant role in the exhibition. During her research, Magaloni analyzed and recreated the color palette used in the Codex, verifying that the colors are not just elements used to paint documents. Their composition and origin define the meaning of the images.

Through the materiality of color, Magaloni refers to the images in relation to the Nahua concept of ixiptla (substitute, representative, image). The ixiptla concept derives from the particle -xip: skin or cover since it is the covering that gives identity and physical reality to the essences. That is why Magaloni considers pigments as the skin of images; the colors make them recognizable and powerful presences and not mere representations. Hence, the paintings of the codices and maps were a manner of repainting/making the world emerge after the conquest.

From Magaloni’s research, Castillo Deball presents a sculptural constellation, a series of murals, and in collaboration with Tatiana Falcón the transformation of the Museum Colonial Patio into a garden of plants and minerals used for the production of pigments and natural dyes based on the Nahua painting treaty in the Florentine Codex. The arrangement of the garden has as reference the structure of space and time according to the indigenous vision depicted in the Codex Fejérváry-Mayer.