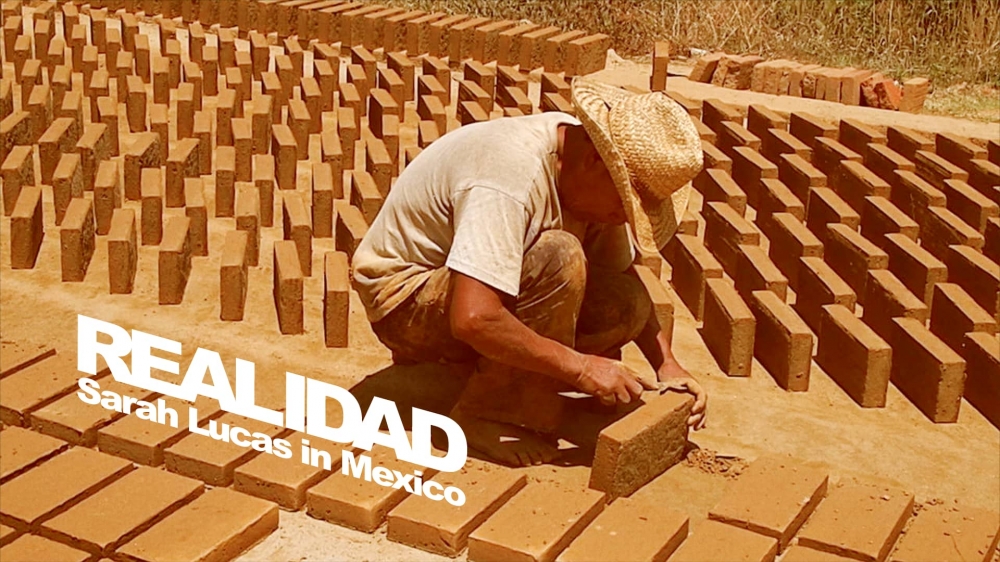 A month in Mexico with British artist Sarah Lucas
“After this everyone will want a Tit-Teddy!”

A film by Julian Simmons

We fly into Mexico City the day after a massive magnitude-8 earthquake hit Mexico - originating on a fault-line in Oaxaca …our next destination. In fact before we left England we were thinking “shit should we go!!”

The film REALIDAD was taken alongside my photographic documentation of a series of sculptures and cigarette-drawings made by Sarah Lucas, for an exhibition to be installed among the pre-hispanic artefacts of Anahuacalli - the studio - museum - temple - built for Diego Rivera …a volcano of a building - in mass and inner darkness.

Arriving in Oaxaca a month before the show was to open, we needed to find a place to live and work, gather the raw materials and make the works – whatever they might be, there was no plan. In the day I was assisting in making the sculptures and test plinths, though mainly photographing the sculptures as they were completed; this photographic documentation became the book TITTIPUSSIDAD.

Oaxaca is where Sarah’s NUD sculptures became truly anthropomorphic, the first of these was REALIDAD.  The meditation were the objects we had seen in Anahuacalli, the active transformative ingredient was mezcal. At the opening of the film, Tit-Teddy is credited as having a starring role – which he does, the final credit goes to mezcal - who in his dimension is a person, with an intent, wanting something from us.

Each day the house in which we worked – sometimes naked due to intense heat, would slowly accrue a bunch of friends. In the evenings we would walk with feet black from volcanic dust, down into Oaxaca, crazy with fireworks, to a restaurant, a party, or the local mezcal bar. With the day’s photography done, these were the gritty, low-light, noisy environments in which I captured most of this film.

A document of ‘the other side’, one of Sarah’s great assets – to speak freely and so to likewise encourage the spirit of others in her company.

I intentionally took only a few photographs of Sarah making the sculptures – I didn’t want my observation to affect her thought processes. The same is true of shooting this film, there are only a few instances here of Sarah sculpting. In any-case most of the stimulating evidence of creation is in the formation of ideas through conversations, rather than the impossibility of capturing thoughts in the head while making.

So this a film not of Sarah making, but largely of Sarah, drunk. A portrait of the artist not with a chisel in their hand, but a mezcal.

There is also a film within a film here. Not knowing what to expect as we entered a ‘brick factory’ in the Oaxaca valley, there emerged something anthropological in its importance. Men crafting mud into the building blocks of whole houses – floor tiles, wall bricks, ceiling slabs, roof tiles.  The scene looked 100’s if not 1000’s of years old. The footage is a record of a way of practice that possibly may not last another generation.

A few days before our departure the nearby volcano Popocatepetl started smoking heavily, villages were evacuated, the airport was on red alert, this place from start to finish had been one hell of a weird hub of energy.