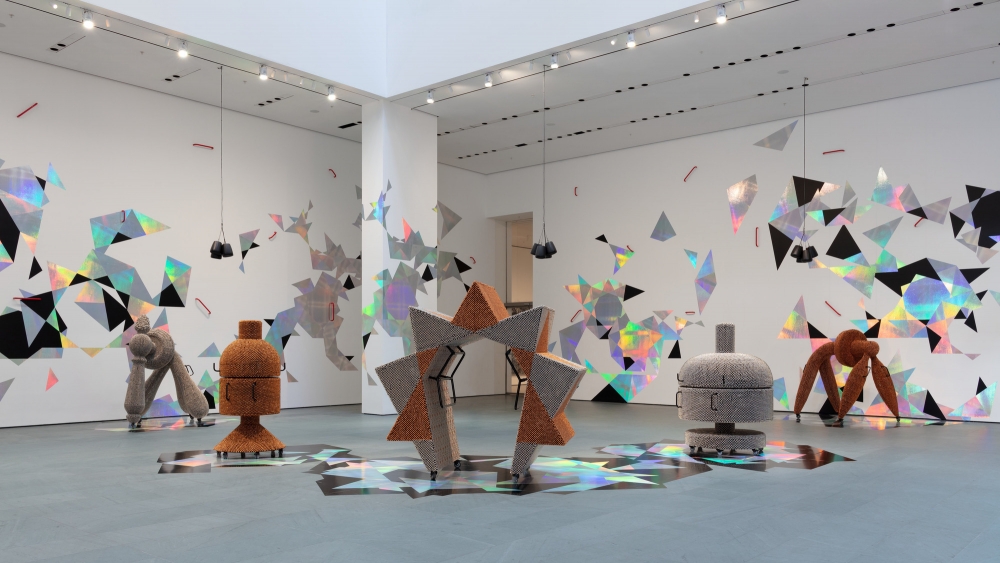 Handles are points of attachment and material catalysts for movement and change. Yang’s installation considers this everyday interface between people and things. Steel grab bars are mounted on the walls amid an iridescent pattern, and put to functional use in her sculptures. These monumental works come in distinctive shapes: some are inspired by the work of early 20th-century figures such as artist Sophie Taeuber-Arp and mystic philosopher G. I. Gurdjieff, and others use open-source designs for door handles to produce freestanding bodies at once futuristic and prehistoric. Mounted on casters and covered in skins of bells, the sculptures generate a subtle rattling sound when maneuvered by performers, and recall the use of bells in shamanistic rites, among other sources. The natural ambient noise of birdsong, which also permeates the space, was in fact recorded at a tense political moment in the demilitarized zone between North and South Korea during the historic summit in 2018. Reporters strained to hear the private conversation between the two nations’ leaders, but their audio devices only picked up the chirping of birds and the faint click of cameras.

Handles draws on Yang’s in-depth research into various sources, ranging from vernacular craft traditions to the historical avant-garde, esoteric spiritual philosophies to contemporary political events. She integrates these seemingly disparate narratives into an artistic language uniquely her own, offering a fresh take on modernism and a critical reading of its legacy.