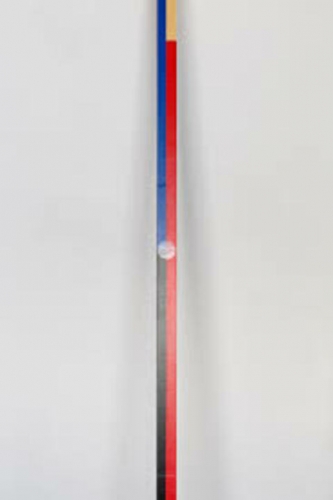 The Roto Shaku are made from a standard length of lumber that the artist has wrapped in a range of colored tapes. Employing his signature geometries, Orozco establishes a counterpoint between multiple traditions of abstraction and seeming abstraction: decorative patterning, practical mark making (as for measurement), and the theories of signs, symbols, and structures that underlie much of modern Western painting. Orozco’s Obi Scrolls were fashioned by incising, rotating, and reversing sections of fragments of antique kimono sashes (obi). The results were then mounted on scrolls as paintings, converting conventions of wrapping into explicit content.