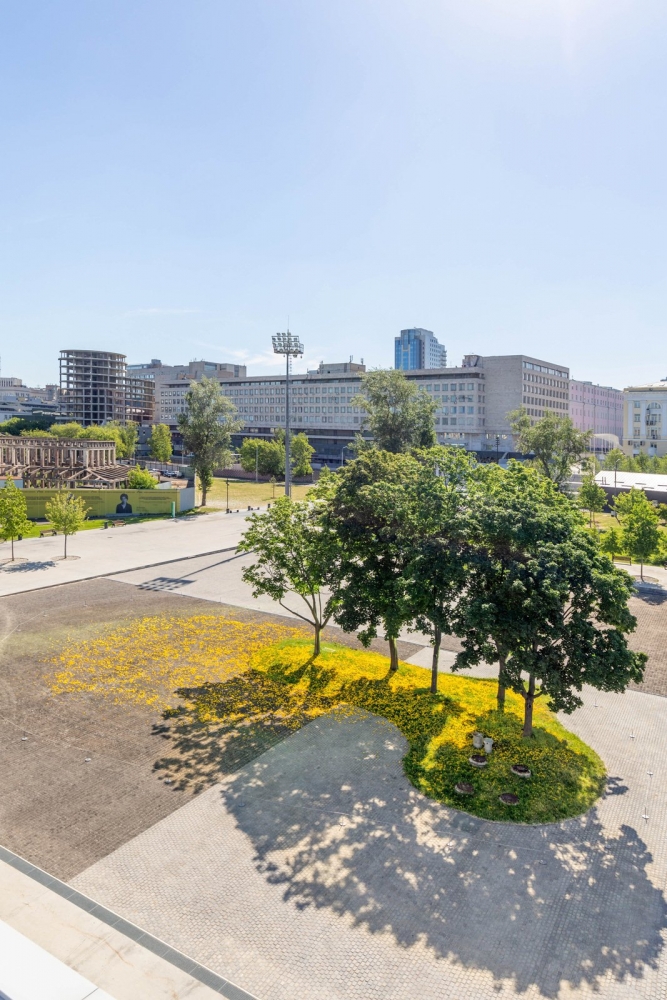 Visitors to the park and the Museum will have the unique opportunity to witness the phantom blooming of Roble Amarillo trees (Tabebuia chrysantha), a common native species in the Caribbean. Recreating the delicate yellow flowers of these tropical trees, thousands of artificial blossoms will remain scattered across Garage Square throughout the summer and winter as an enduring reminder of the increasingly rapid disappearance of the planet’s biodiversity.

Graft alludes directly to global climatic transformations. More frequent and violently destructive hurricanes in recent years have been the direct cause of millions of fallen trees in the Caribbean region. Rising global temperatures have added additional pressure to this biodiversity hotspot. The Caribbean, from the days of Christopher Columbus onward, has been systematically exploited and subsequently depleted of much of its original flora and fauna. While deforestation can certainly be said to be the primary legacy of colonialism in the Caribbean, this region, along with the 35 others worldwide named as hotspots (which amount to just 2.4% of the land surface of the earth) support nearly 60% of the world's plant, bird, mammal, reptile, and amphibian species.

By using an approach that is both poetic and scientific, Allora & Calzadilla create a boundary-transcending installation that provokes a subtle yet powerful visualization of the ecological crisis which we must all collectively confront. In Graft, tropical tree flowers, scattered under the trees on Garage square become phantoms of fallen trees from an elsewhere that haunt the place where they now are present. The uncanny way in which the blossoms appear as both plausible and out of place becomes a potent harbinger for the changing environments that we have created. At the same time the artists seem to insist, by way of this concrete example of a neo-colonial landscape, on the importance of giving visual form to the ways in which a global phenomenon such as climate change is manifest specifically in a particular place, magnifying historic inequalities and injustices.

Creating an experimental body of work since 1995, Allora & Calzadilla’s practice traces the intersections of history, material culture, and politics through a wide variety of mediums, namely performance, sculpture, sound, and video. Their formally unique artistic language is deeply informed by a critical and visionary approach toward meaning-making.

Allora & Calzadilla’s installation will resonate with the themes examined in The Coming World: Ecology as the New Politics 2030–2100, an exhibition exploring important issues around environmentalism and ecology, which will take place at Garage from June 28 to December 1, 2019.