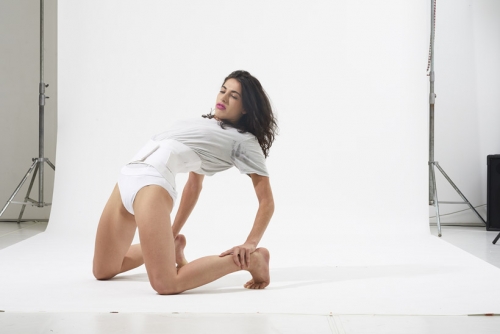 Pioneer Works presents for the first time in the United States the performance Escape Act by Alexandra Bachzetsis, after her tour of Europe in places such as the Pompidou Center, Paris. Escape Act marks the launch of a performance initiative at Pioneer Works that aims to support artists working between theater, visual art, sound and choreography.

Escape Act begins with a dancer striking a series of poses. Her face, covered with a black cloth, hides her gender, although she wears all the traditional signifiers of a woman: electric orange high heels, ponytail, a feminine body shape. However, if Escape Act means anything, it is that signifiers cannot be trusted. Within the performance, women undress to reveal that they are men, only for men to reveal themselves as women. Gender identities are portrayed as exaggerated, hyperesthereotypic, and unstable as one moves to another. Bachzetsis's choreography hovers across the spectrum of "ball culture" and "voguing," as do strip clubs and, in particular, drag, which consists of one identity posing as another.

We can think of "passing" as a kind of escape, or, as a call to action, a directive to separate assigned normative behaviors, as transgender theorist and activist Paul B. Preciado evidenced in his poem Love is a drone, excerpts of which they are spoken by the permormers of Bachzetsis. In Escape Act, the image is everything, and Bachzetsis defines it not as an ideal to aspire to, but as a hegemony to dismantle.