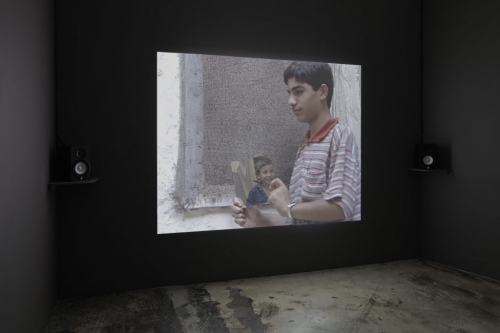 Akram Zaatari is an internationally renowned Lebanese artist whose work is based on researching and studying the photographic record in the context of modern Arab societies. Through his practice Zaatari seeks to explore people’s attitudes while filming or photographing themselves. He is interested in how certain behaviours in front of the camera become trends, and in the context of video sharing websites such as YouTube, how “shared scripts” begin to emerge as people copy, alter and re-enact one another’s videos.

The Script, 2018, is a new work which responds to what Zaatari has perceived as recent trends in YouTube videos created by practicing Muslims. Potentially a means of countering the negative view of Islam portrayed by the media, Zaatari has observed a new wave of YouTube videos depicting modest, everyday and loving acts often involving faith and family. Of particular note is the recurring footage of fathers fulfilling their duty of salāh (the five daily prayer ritual) whilst their mischievous children attempt to playfully disrupt their concentration.

For The Script, Zaatari has re-enacted these behaviours now choreographed with actors. By rehearsing, filming and editing this footage, Zaatari deliberately works against the increasingly rapid pace of the internet and slows down the speed with which private images or moments become public.

The exhibition also includes an earlier film titled Nour (Reflection), 1995, made with a cast of nonprofessional child actors in Saida, South Lebanon. Playing with a mirror that is passed from child to child over the course of the film, the children manipulate the light and experiment with framing the world around them showing a knowledge that can be spontaneously and playfully transmitted.