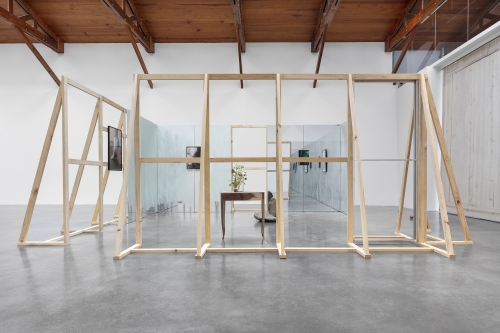 kurimanzutto presents the second solo exhibition by Danh Vo in the gallery. Examining the present to understand his past, Vo also looks at the future and thus weaves objects, people and histories, both personal and official, into his work. The artist’s practice has long since been informed by his interactions with friends and relatives. Vo's work can be understood completely through the collaborations he has established with his significant others: his father, his lover, his nephew, his friends. Following a series of projects, such as the Venice Biennale and his most recent show at the South London Gallery, Vo presents works that continue to expand upon the artistic importance of those relational connections.

A series of paintings on mirror foil by his former tutor at the Royal Danish Academy of Fine Arts, Peter Bonde, have been created at the gallery. Bonde’s characteristic smearing technique is applied over printed dialogues from the movie The Exorcist. A similar series of these artworks by Bonde have been integrated to Vo’s latest projects. Their once fraught student-professor relationship has now turned their confrontation into a fruitful and creative collaboration.

Combined to these paintings are the photographs that Heinz Peter Knes has taken of Vo’s nephew and muse Gustav. These cliches make direct reference to fashion photography in Gustav’s attitude and demeanor but are also the testimonies of their friendship between the confident young adult and the artist. Vo’s family have been omnipresent in the construction of his artistic practice - namely Phung Vo, the artist’s father - who has been a close collaborator throughout his career, excelling in the practice of calligraphy. New drawings using his favorite typeface will also be part of the composite installation at kurimanzutto.

Weaving his past with the history of Vietnam and of the world, Vo has acquired objects from the estate of Robert McNamara, former United States Secretary of Defense (1961-68), a notorious figure in the military politics of the Vietnam War. This first contact with the McNamara family led their son Craig McNamara to befriend Vo and later gift him with a walnut orchard, its timber destined to make rifle stocks. Instead, the timber has been used by the artist to make replicas of designer furniture or to be used raw and unfinished in his exhibitions.

Close relationships, accidents of history, chance encounters and past confrontations are not only part of Vo’s artistic practice but of his life as a whole, an endless chain of associations and references that work as networks of meaning. 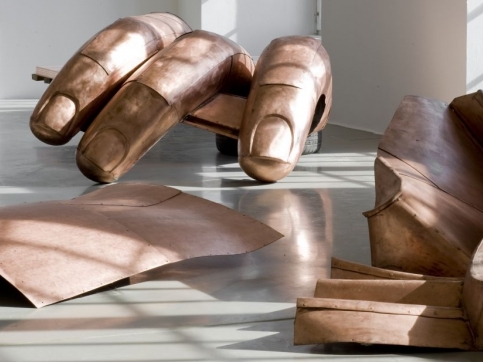